Kindle Review sums up the show:

Mirasol’s Color eReader is mighty impressive – and not scheduled to release until Q3, 2011. Pixel Qi is pretty impressive too – except the lowest priced version of the Pixel Qi screen Adam tablet is 9.

The Paltry line-up of eReaders at CES 2011

As compared to CES 2010, when there were dozens of eReaders anywhere, there are just a few eReaders being shown at CES 2011 -

* The Eee Pad Memo is a very impressive eReader + eWriter – Except it’s using a LCD instead of eInk, and is priced between 9 and 9.
* iRiver has the new Story HD eReader – a 6″ eReader with 1024 by 768 screen resolution. It supports WiFi, ePub and PDF with Adobe DRM. It has 3 weeks of battery life. It’ll be available in Q2, 2011. Not much of a threat.
* Aluratek has its Libre Air eReader – a 5″ reflective TFT LCD screen, WiFi, and a 0 price point. Hardly a threat.

Despite their fondness for social networking and cell phones, most college students say they prefer textbooks in printed rather than e-text form. Nearly 75% of students to recently respond to a major new research survey from the Book Industry Study Group (BISG) said they prefer printed texts, citing a fondness for print’s look and feel, as well as its permanence and ability to be resold.

This finding was among many uncovered in BISG’s inaugural survey entitled Student Attitudes Toward Content in Higher Education. The ongoing survey focuses on college student perceptions related to educational content and presentation media in the higher education market. It is powered by Bowker’s PubTrack data, the publishing industry’s exclusive resource for understanding buying behavior.

“Research studies like Student Attitudes Toward Content in Higher Education enable informed decision-making,” said Scott Lubeck, BISG’s Executive Director. “College students are an exceptionally dynamic demographic, making the technology transformation underway within the higher ed market very hard to plot. Our ongoing survey of student attitudes will help everyone in the publishing business make sense of this changing market place by providing hard data on the impact of habits and preferences.”

Although not the preferred textbook form for most college students, further data from the survey shows that e-texts do have fans. About 12% of the students surveyed — mostly males, and often MBA-seeking or distance learners — said they prefer e-texts to printed texts because of their lower cost, convenience and portability. In addition, online supplemental materials received favor from these respondents as well. Particularly online quizzes that tests students’ understanding of a text’s content and prepares them for exams.

The majority of survey respondents (60%) said they place high value on core textbooks — whether printed or electronic — most of which continue to be purchased at the college bookstore (65%). Online purchasing is growing, however. For example, one-fifth of students said they purchased textbooks from Amazon.com. Finally, perhaps because of rising purchase prices, renting a textbook — rather than purchasing or downloading — was preferred by 11% of surveyed students.

If you are a Mac person then take a look at this article at The Unofficial Apple Weblog about Mac app pricing. 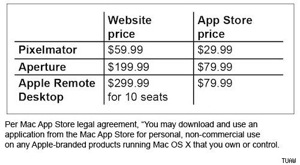 Rosenthal, of Foner Books, is making this estimate based on an extrapolation from the Kindle sales rank graph. He goes on to say:

Kindle is a runaway train heading for Manhattan, and as it roars through Penn Station and under the city, it is shaking the foundations of New York’s oldest trade publishers. Increasing eBook sales mean increasing cost per unit for print books, since fixed production costs will be amortized over fewer print unit sales.

More details in the article.

And 6% of internet users said they had paid for another kind of content that had not been mentioned in the list of 15 we queried.

The Pew Research Center’s Internet & American Life Project tried to get a broad overview on this subject exploring what types of online content internet users are purchasing, how they are purchasing it, and who is doing the purchasing. The survey data reported here are from telephone interviews with a nationally representative sample of 1,003 adults living in the continental United States – of whom 755 are internet users. Telephone interviews were conducted by landline (672) and cell phone (331, including 134 without a landline phone). Interviews were done in English by Princeton Data Source from October 28-November 1, 2010. Statistical results are weighted to correct known demographic discrepancies. The margin of sampling error for the complete set of weighted data is ±3.7 percentage points, and the margin of error on the internet sample is +/- 3.9 percentage points.

Amazon Says Kindle Best Selling Product Ever
Apple iPad owners are also buying e-readers according to the online retailer, which announced that sales of the Kindle have surpassed its previous all-time bestseller, "Harry Potter and the Deathly Hallows."
Read more on InformationWeek

Apple iPad 2 could ship as early as February, report says [Updated]
Foxconn Electronics, a Chinese technology manufacturer, could ship Apple's iPad 2 as early as February, according to an article from the DigiTimes on Tuesday. The article sites unnamed sources, but says that the next iPad hasn't yet had its specifications finalized.
Read more on Los Angeles Times