Here’s a neat idea about how handheld tech could help regular librarians. ReadWriteWeb reports that a study group at Miami University has come up with an augmented reality Android app that could allow librarians to tell at a glance when books on library shelves are out of order, by using a built-in camera to read tags attached to the spine of shelved books and superimposing indications of which books are out of place. It will also generate inventory reports.

It wouldn’t work for very thin books, such as those found in children’s sections, but could be very helpful for others when it gets out of the prototype stage. As the son of two librarians, I can say unequivocally that this is really neat stuff.

A reality check on college financial aid
As the parent of a soon-to-be college student, I'm privy to a lot of conversations other parents have about their child's chances of getting significant scholarship or grant money.
Read more on Everett Herald Trouble reading on your iPhone without walking into things? E-book app MegaReader may have you covered. It’s just added a “heads up display” feature, which uses the camera on camera-equipped iPhones (and presumably the iPod Touch 4; earlier Touch owners would be out of luck) to superimpose the text of what you’re reading over a view of what’s in front of you.

Whether or not the feature would be useful in “real life” (would being able to see a view through the camera while reading really keep you from running into things?), it does provide an excuse for a hilarious promotional video.

Don’t try this at home. 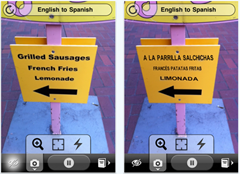 Our sister blog Appletell points to an interesting iPhone app that might just point the way to the future of digital translation devices. The app, Word Lens, is an augmented reality app that will translate English words it sees into Spanish words, or vice versa, superimposing the translation in place of the original words on the screen.

This brings to reality what digital fansubbers have been doing for a lot of Japanese animation over the last few years: rather than just adding translations as subtitles at the bottom of the screen, they’ve actually been erasing the text of signs, letters, notes, and so on and painting translations directly into their place, often so well you can’t even tell it was done after the show was made. (It’s really amazing how far fansubbing has come; these works often look as good as or better than professionally-produced versions.)

At the moment, Word Lens can only translate between English and Spanish, but other language packs will be coming soon. I wonder how effective it will be on pages of foreign-language books or magazines?

One thing’s for sure: this is going to be an even bigger helper than phrasebooks for overseas travelers.