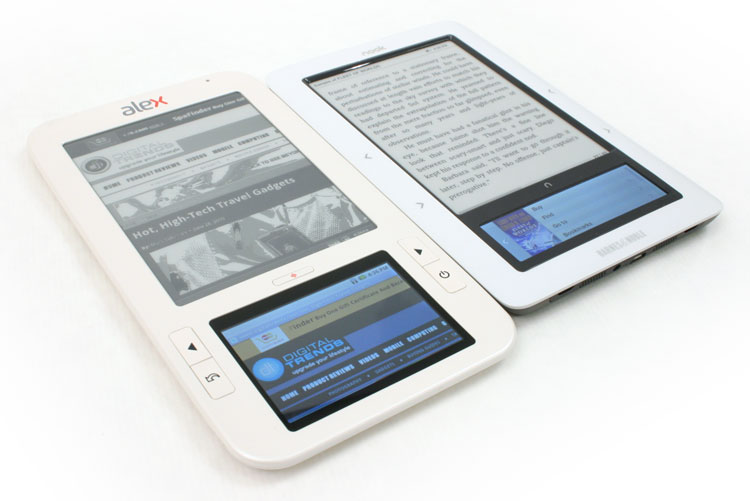 Spring Design initiated the lawsuit in 2009 when they had met with Barnes and Noble to discuss jointly creating an e-reader. The meeting went nowhere, but months later Barnes and Noble released the Nook 3G which is much akin to the Spring Design Alex e-Reader. Spring design took them to court saying you guys copied our design. While the Nook went on to be a huge success, the Alex e-Reader ended up not selling very well and now their model is discontinued.

Although exact terms of the licensing and royalty fees were not disclosed, it was enough to salvage the company. Recently we reported on Spring Design having money problems and their main investor pulling out. This made the Alex discontinued on their website and through their supply chain. Hopefully with a huge influx of money Spring Design might work on the next gen of e-readers.

Check out the Press Release

Eugene V. DeFelice, Vice President, General Counsel and Secretary of Barnes & Noble, Inc., said, “We are pleased to put this matter behind us. NOOK Color™ and NOOK™, together with Spring Design’s patents and patent applications, have become two of our most innovative and highly-sought after devices. Barnes & Noble is pleased to add Spring Design’s patents and patent applications as a complementary addition to our rapidly growing digital portfolio.”

Barnes & Noble, Inc. (NYSE:BKS), the world’s largest bookseller and a Fortune 500 company, operates 705 bookstores in 50 states. Barnes & Noble College Booksellers, LLC, a wholly-owned subsidiary of Barnes & Noble, also operates 636 college bookstores serving nearly 4 million students and faculty members at colleges and universities across the United States. Barnes & Noble is the nation’s top bookseller brand for the seventh year in a row, as determined by a combination of the brand’s performance on familiarity, quality, and purchase intent; the top bookseller in quality for the second year in a row and the number two retailer in trust, according to the EquiTrend® Brand Study by Harris Interactive®. Barnes & Noble conducts its online business through Barnes & Noble.com (www.bn.com), one of the Web’s largest e-commerce sites, which also features more than two million titles in its NOOK Bookstore™ (www.bn.com/ebooks). Through Barnes & Noble’s NOOK™ eReading product offering, customers can buy and read eBooks on the widest range of platforms, including NOOK eBook Readers, devices from partner companies, and hundreds of the most popular mobile and computing devices using free NOOK software.

General information on Barnes & Noble, Inc. can be obtained via the Internet by visiting the company’s corporate website: www.barnesandnobleinc.com.

Just a few days after Spring Design mentioned that it was discontinuing the current generation of Alex dual-screened e-book reader, TechCrunch reports that Spring Design has settled its lawsuit with Barnes & Noble over the Nook’s design similarities to the Alex. And it sounds like B&N pretty much got its way.

The suit was dismissed with prejudice, which means it cannot be refiled. Meanwhile, Spring Design is going to discontinue the reader and focus on developing “next generation eReader products and services”.

Probably for the best that Spring Design got out of the kitchen; with prices falling to below 0 and beginning to approach 0, the e-reader market is starting to heat up to the point where smaller, lesser-known companies that can’t keep their own prices down just don’t have a chance.

You can turn the Nook Color into a fully-functional Android tablet, but conversely you can also read Nook books on other Android devices through Barnes & Noble’s Nook app. Now Engadget reports that B&N has updated that app with a number of minor features including a library grid view, book download progress bar, and wish list. Barnes & Noble also promises a Honeycomb app will come out sometime this spring.

Between this and the recent addition of Google Books to the Android market, Android is starting to look more and more like a viable alternative to iOS for e-book lovers every day.

CNet picks up on another point brought up Barnes & Noble’s third quarter earnings report that I mentioned the other day. According to this report, the Nook now accounts for a 25% share of the e-book market in the US.

Barnes & Noble did not cite any figures, so it is unclear whether it is counting by revenue or number of titles sold. But if the report can be taken at face value, Barnes & Noble is not in as much danger of becoming an e-book also-ran as some have feared in the past. 25% is a respectable figure for a market that large.

Barnes & Noble suspends dividend; profit falls short
Barnes & Noble Inc suspended its dividend to preserve its dwindling cash and declined to give a sales forecast for the current quarter, sending its shares down 8 percent.
Read more on Reuters via Yahoo! News

Not content to rest on its heels following Borders‘ bankruptcy, Barnes and Noble is embarking on a new branding effort. AdAge reports the retailer has dumped their previous creative agency, SoHo’s Merkley and Partners, and will now tap Boston-based Mullen, whose client roster includes JetBlue, Zappos, and Ask.com, for an expanded marketing campaign, a “new look for stores,” and an overall brand refresh. The investment is worth an estimated million—this after a quarter when profits fell 25% to million (overall sales are up, however).

While Mullen and B&N have declined to comment on the matter, it seems likely the company’s marketing efforts will seek to further emphasize its digital offerings as it continues to invest heavily in the Nook e-reader and tries to win a larger share of the e-book market from Amazon. What will this mean for the company’s design? The current logo (seen above), in a mix of sturdy all-caps fonts, sells B&N as a dependable brick-and-mortar institution, with an elegant ampersand conveying a sense of history—”Est. 1873,” it seems to say. The Nook, on the other hand, is all lowercase, with playful geometric letters which desperately aim to make our electronic future look fun. As Barnes and Noble works to turn its stores into places where customers shop for both printed books and e-books, expect to see a visual reflection of the shift from the retailer’s past to its digital future. Barnes and Noble released a new program last year called PubIT, which allowed independant authors to create eBooks and have them listed in the Barnes and Noble eBook store.  The PubIt program has been a resounding success and recently hit the 11,000 published works milestone and 35 of these are in the top 200 best sellers. Barnes and Noble has staged various events featuring the authors themselves and giving prospective authors a chance to engage in a Q and A.

The first event kicked off today at the Santa Monica location featuring H.P. Mallory, Beth Orsoff, a traditional turned self-published author who has boosted her sales with PubIt!, and Lisa Cortés, President of Cortés Films and Executive Producer of the Academy Award-winning film Precious. There will be more events like this in the feature, so stay tuned for more information.

The next event at Barnes and Noble will occur on February 26, consumers who visit any of Barnes & Noble’s more than 700 stores and take a guided tour of Nook Color with a bookseller will get a free tall cup of hot or iced fresh-brewed Starbucks coffee in the Barnes & Noble Café.

We have covered PubIT extensively throughout its closed beta to the official release in October of 2011. The program is very solid and easy to use if you have done your written work on a popular word processor. You can use RTF, DOC, TXT and other file-types to the very popular ePUB format. Every Barnes and Noble E-Reader launched to date supports this format and so does popular other ones including Sony, Kobo and Pandigital. Once you submit your book and make a Pubit account you can submit your content and within 24 to 72 hours later you can be an officially launched author.  Although creating your book is the first step and in order to have it sell you should invest some time in self promotion, creating a facebook page, and your own press releases.

“The variety and quality of the content we are seeing through PubIt! is beyond our expectations,” said Theresa Horner, Barnes & Noble’s Vice President, Digital Content.  “We are thrilled with our initial sales for PubIt! titles as our millions of customers enjoy exploring newly added works from PubIt! writers and publishers.”

It is very impressive that Barnes and Noble has been able to attract over 11,000 authors and aspiring writers to submit content through their system that is barely 4 months old. Some authors in particular have had some great success.  H.P. Mallory, author of Toil and Trouble, Fire Burn and Cauldron Bubble, and To Kill a Warlock, calls PubIt!, “an incredible experience…one of the best decisions I ever made.”  Mallory’s paranormal romance books have become such a hit that she just signed a three-book deal with a major publishing house.

Hopefully Barnes and Noble continues to showcase their authors and have more artist panels at their various locations. Not only will it draw attention to their digital publishing initiative but it would give an advantage to the company that Amazon cannot provide. Barnes and Noble is taking advantage of their tangible retail spaces and large book stores, that are a great place to showcase their own authors and build their brand internally. Meanwhile Amazon has a virtual website only and cannot put its own authors in the forefront, while their Digital Text Platform continues to be THE most popular self authoring program on the internet. If B&N can continue to the momentum of this event into future ones it could very well double the 11,000 authors using the program in another four months.

Although Barnes had a good last quarter—7% increase in total sales, 64% increase in sales at Barnes&Noble.com—the bankruptcy of Borders is inclining its board to be cautious. The company’s sales report contained a note stating that it has decided to suspend its quarterly stockholder dividend payment in order to have more cash on hand so it can meet whatever market challenges and opportunities caused by this sudden new development.

Not too surprising. It’s not beyond the realm of possibility that B&N might expand into an abandoned Borders storefront or two, and having more cash on hand could help them do it.