The Library of Congress has released Preserving Our Digital Heritage: The National Digital Information Infrastructure and Preservation Program 2010 Report.

Here’s an excerpt from the press release:

It documents the achievements of the Library of Congress and its NDIIPP partners working together to create sustainable long-term access to digital materials.

Since NDIIPP was founded in 2000 by an act of Congress, a network of over 185 partners in 44 states and 25 countries have developed a distributed technical infrastructure, preserved over 1400 at-risk collections, and have made strides to support a legal environment conducive to digital preservation.

The report describes a decade of action in digital preservation and outlays the short- and long-term plans to ensure libraries, archives and other heritage institutions in the United States can collect and provide long-term access to the resources of the 21st Century, and beyond.

The National Archives has always been a great source of PDF and other non-fiction documents for my eBook reader.  Escape and Evasion reports, WPA guides, After-Action Reports, all of these have made for some interesting reading.  However, navigating the archives and the ARC (Archival Research Catalog) to find new items has always been somewhat challenging.

No more!  Stopping by the site in the last few weeks, I’ve noticed big changes in how you can search for electronic items for download.  If you go to the Online Public Access Prototype, link at http://www.archives.gov/research/search/, a massively streamlined search portal is now available for use.

Besides the easy search box, you will find a single way to search many parts of the archives at once.  Ranging from the Electronic Records Archive to Archives.gov and many more, this will help you to zero in on the documents you might be looking for.

I thought I would test it out by searching for broad topics, such as World War II.  In the past, I’ve had pretty good luck searching this way, refining my results and doing some subject searching to quickly narrow down to a specific topic.

The beta search came back with some impressive results and key findings that gave me some more leads.  What I really found most helpful though was the reworked interface and how the results are shown on screen.  The main viewing window gives some initial results and are grouped by classes such as online holdings, subject headings and others.

The biggest, and best change I see, is the fact that on the left, the results grouped by document format or “clusters” as they are called.  These range from file format (pdf, mp3, etc.) to types of materials, dates, and descriptions, just to name a few.

Selecting PDF format, I was able to narrow my results down to just over 3,000 hits.  From here, it’s possible to “re-refine” results down even further.  By doing this, and limiting to just the years of the war, I was able to get a manageable number of results that looked promising.

Individual results of my search also showed a newly reworked document viewer, enabling a direct PDF download of the digitized document to your device, be that a PC, phone or Internet equipped reader.  Testing with my Android and iPad, I found the documents loaded successfully and were easy to view.  Your experiences may vary, depending upon your device and what you are looking for.

If you’re looking for some great historic documents or information from the National Archives, take a look at the site today.  It may be beta, and so subject to change, but this doesn’t take away a great new method of searching!

Ebook Cracks:Henry Petroski: 2010 National Book Festival
Engineer and professor Henry Petroski speaks at the 2010 National Book Festival. Speaker Biography: Henry Petroski is the Aleksandar S. Vesic Professor of Civil Engineering and a professor of history at Duke University, where he specializes in the analysis of failure. His first of many books was "To Engineer Is Human: The Role of Failure in Successful Design." He holds a Ph.D. in theoretical and applied mechanics from the University of Illinois at Urbana-Champaign and is a distinguished member of the American Society of Civil Engineers. He has most recently written "The Essential Engineer: Why Science Alone Will Not Solve Our Global Problems" (Knopf). He lives in North Carolina and Maine.

TeleRead’s founder, David Rothman, has an article on today’s front page of the Chronicle of Higher Education.  The article,  “It’s Time for a National Digital-Library System,” is familiar to most TeleRead visitors, describing his concept of a national digital library, as well as the support his idea has received from popular pundits:

(William F.) Buckley loved my proposal (“inspiring”) and came out in the 1990s with two syndicated columns backing the vision. As a harpsichord-playing Yalie famous for political and cultural conservatism and cherishing archaic words, Buckley was hardly a populist in most respects. But he fervently agreed with me that a national digital library should be universal and offer popular content—both books and multimedia. The library should serve not just the needs of academics, researchers, and lovers of high culture.

The article discusses a bit of the background and history of ebooks for public consumption, and promotes LibraryCity.org, “a new online ad hoc group that will seek to deal with these matters, especially whether the national digital library should be mainly for the intellectual elite or also serve the rest of society in many directly practical ways.”  It goes on to present criteria for the national digital library:

Full text of the article, including details on the above bullet-points, are available on the Chronicle website. 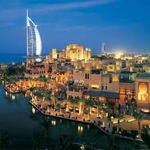 From an Article in The National (Abu Dhabi):

To the outside world, familiar with the UAE for its modern skyscrapers and luxury hotels, rare colour snapshots of the capital taken almost 50 years ago provide a valuable insight into the country’s past.

Until now those images, as well as hundreds of other historical documents, could be seen only in the archives of the National Library.

Now, thanks to an agreement between the Abu Dhabi Authority for Culture and Heritage (Adach) and the World Digital Library (WDL), more of this invaluable historical material will be available online.

The partnership was vital to ensuring the world could access accurate information about Emirati heritage, said Jumaa al Qubaisi, the deputy director general for National Library affairs and the director of the National Library at Adach.

The images, he said, would soon be available purely for viewing – not to be used in any outside projects – on any laptop, computer or smart phone.

Learn More About the Library

Paper Round (7 February) – Which clients are advertising in the national press?|Lastest Kindle News]

Paper Round (7 February) - Which clients are advertising in the national press?
Two building societies vie to promote their service benefits in today's papers, while BlackBerry claims to be the UK's number one smartphone.
Read more on Media Week Online

Westminster teams remain in national rankings
Updated Feb 2, 2011 01:48PM MDT The Westminster College men’s and women’s basketball team remain in the NAIA Division I basketball rankings this week. The Griffin women, who are on a six-game winning streak, reached a season-best No. 9 ranking this week and have now been ranked in 17 consecutive polls. They beat Great Falls and Montana State-northern last week and lead the Frontier Conference at ...
Read more on The Salt Lake Tribune

National Signing Day 2011: The Top 10 Prospects Locked Into Their Commitments
With signing day approaching there are sure to be some surprise commitments and even more surprising de-commitments in college football recruiting. It comes with the territory as these players are just 17-18 year-old teenagers who flip-flop many decisions. However, there are some prospects who are just stone cold solid in the pledge to their respective programs and are even helping out by ...
Read more on Bleacher Report

Tagged as: 2011, Commitments|Lastest, into, Kindle, Locked, National, News, Prospects, Signing, Their No Comments

M2SYS Announces Participation in 2011 National Retail Federation “Retail’s Big Show”
Goal is to Demonstrate The Value Of A Desktop Biometric Add-On To Any Workforce Management Or Point Of Service Application
Read more on PRWeb via Yahoo! News

From A PQ Announcement:

ProQuest will digitize more than 30,000 rare early books from the Koninklijke Bibliotheek (KB), the National Library of the Netherlands, capturing every volume in high-resolution color scans. This is the third major European national library to participate in ProQuest’s Early European Books project after the Danish Royal Library, Copenhagen and the Biblioteca Nazionale Centrale di Firenze in Italy. As with the agreements in Denmark and Italy, the material will be free to access in the host country.

ProQuest will scan the library’s holdings up to 1700, beginning with books printed in the Netherlands before moving onto works from other countries. The KB’s collection range from the nation’s earliest printed books, such as the Delft Bible of 1477 (the first book published in Dutch), through to the prodigious output of the printing house of Elzevir, founded in Leiden in 1583. The Elzevir family were at the forefront of European intellectual life in the seventeenth century, publishing current thinkers such as René Descartes (1596-1650) and Galileo Galilei (1564-1642) alongside important editions of Classical authors (Virgil, Terence, Pliny, Caesar), and a series of books by French authors on history and politics known as the Petites Républiques.

The 16th and 17th century collections reflect the history of the Netherlands in this period: the revolt against Catholic Hapsburg rule, the establishment of the Dutch republic and the emergence of the Netherlands as a naval power. There are early songbooks such as theGeuzenliedboek, in which the Dutch national anthem ‘Wilhelmus’ first appeared in 1581; 11,000 pamphlets featuring political broadsides, sermons and polemics; and works of travel, surveying and cartography, including handcoloured copies of Jan Huyghen van Linschoten’s account of an early voyage to Indonesia (1596) and Joan Blaeu’s Atlas Major (1662), and the Practijck des lantmetens (The Practice of Surveying) from the library of Prince Maurice of Nassau (1600). Major Dutch authors are also well represented, from the Golden Age dramatists P. C. Hooft (1581–1647) and Joost van Vondel (1587-1679) to humanists and philosophers such as Desiderius Erasmus (1466-1536), Hugo Grotius (1583-1645) and Baruch Spinoza (1632-1677).

Through the Early European Books project, ProQuest is building an increasingly comprehensive survey of printing in Europe to 1700 by digitizing and bringing together the holdings of major rare book libraries. Scanning on-site at each library, the books are captured in vivid detail.