I’ve often expressed the opinion here that mobile phones are a major way of bringing literature to people – far more important than the classic ereader, such as the Kindle, that we see in the rich developed countries. Now comes another example of this. From the Irish Times:

Millions of Chinese have abandoned traditional books for mobile phone novels, and as smartphones start to become more popular in China, the genre is getting ever more popular. The novels are punchy and pacy, the whole process is wildly interactive and it’s transformed reading in China.

“The appearance of mobile phone literature may revive the declining mid-sized novel and poem in China,” says Zhang Yiwu, a literature professor at Peking University and one of China’s most respected commentators.

Written Chinese is a character-based language, so each word is a concise pictogram, rather than a lengthy English word of several letters which takes up more space. This makes Chinese a great language to write mobile phone novels in, as you can communicate a lot of words in a relatively small area of space.

… Data shows that almost half of Chinese adults read books, in different forms, and about 25 per cent of readers – some 220 million people – read electronic media.

Much more info in this fascinating article.

That’s what TUAW is reporting:

Parents must be finding it easier than ever to keep kids in the backseat distracted — Disney Publishing has hit 1 million downloads of its Disney Book Apps for the iPad, iPhone and iPod touch.

Disney Publishing has 9 book apps on the App Store, all of which have been seen in the top 10 paid book apps since the iPad debuted in April. Four of the apps are currently listed in the Top 10 in the iTunes App Store Books category, with Toy Story Read-Along in the Top 5 Book Apps in 35 countries.

Kobo to be preloaded on over 20 million devices 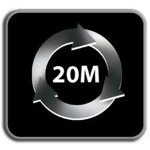 That’s according to this press release:

Kobo, the only pure-play global eReading service built on an open platform, today announced that it has gained access to more than 20 million consumers through securing relationships with over a dozen partners that include tablet and eReader original equipment manufacturers (OEMs) and mobile operators. Kobo has attracted key partners including Samsung and RIM with its unique, innovative, strategy of making eReading available on any device from its open, cloud-based platform.

“In 2011, Kobo will emerge as the leading eReading service thanks to the adoption of tablets like the iPad, Samsung Galaxy Tab and RIM Playbook. We estimate that Kobo will be preloaded on over 20 million devices this year,” said Michael Serbinis, CEO of Kobo. “As the only pure-play service in the space, our strategy has always been to make eReading available on any device, and our open-platform eReading applications and eBook store have proven to be popular among tablet OEMs looking to offer eReading to their customers.”

Open standards are essential to giving users the freedom to build and access their lifetime libraries as they choose, something that Kobo’s partners are aligned with. Kobo’s content is accessible through more than ten platforms including most smartphones, iPad, iPhone, BlackBerry, Android, Android Tablets, PC and Windows Tablets, MAC and Linux. Kobo’s free applications are consistently among consumers’ favorites, regularly a top ten app in the iTunes store for 2010. Throughout 2011, Kobo will introduce support for additional platforms including QNX for the Blackberry Playbook.

Rosenthal, of Foner Books, is making this estimate based on an extrapolation from the Kindle sales rank graph. He goes on to say:

Kindle is a runaway train heading for Manhattan, and as it roars through Penn Station and under the city, it is shaking the foundations of New York’s oldest trade publishers. Increasing eBook sales mean increasing cost per unit for print books, since fixed production costs will be amortized over fewer print unit sales.

More details in the article.

Apple orders 65 million iPad screens
Apple may be a lot more confident in the iPhone than we thought. According to DigiTimes, the house of Jobs has ordered 65 million 9.7-inch iPad screens for 2011. If true, this means Apple is confident that 2011 will be a banner year for the iPad. Most estimates put iPad sales in the neighborhood of 45-48 million units for 2011.
Read more on Digital Trends via Yahoo! News

Amazon's Secret Kindle Sales: 8 Million in 2010?
Amazon still won't say how many Kindles it is selling. But Bloomberg believes a couple of sources who say the e-commerce giant is doing booming business with its e-reader: It thinks Amazon is on track to sell 8 million devices this year.
Read more on AllThingsD Online via Yahoo! Finance

Guess who is the latest entrant to the million gadgets clubs! It’s our very own Amazon who claims to have sold a million Kindles in just the first 73 days of the holiday quarter. Now Amazon is notorious for not coming out with concrete figures as far as sales of its Kindle range of e-readers are concerned, leaving everyone to only just guess how many of the e-readers may have found buyers. Also, if that is the case then there is every possibility of Amazon has actually sold at least 2 million, considering the one million figure comprises of only the recently launched new Kindle and that the Kindle DX is also on sale simultaneously.

It’s always a lot better to have some hard figures to deal with when it comes to sales details, as nothing paints the real picture more vividly as hardcore numbers. And it’s good Amazon has finally decided to follow the trend. While Kindle can never match up to the iPad (in its present form at least), they are still competing for the consumers’ attention. With both being as different from each other as chalk is to cheese, a comparison between the two is bound to come up. For a change, Amazon has made things all the more interesting by coming up with a raw figure that will make it easier to see how it stakes up to the million munching iPad.

Google launches eBookstore with 3 million books
As we reported last week, Google is launching its own e-book store. Previously known as “Editions” Google eBookstore launches today. Google claims it has the largest book library of any seller, with more than 3 million titles available, most of which are free. Several hundred thousand titles, including many current bestsellers, are for sale for about – .
Read more on Digital Trends via Yahoo! News

Formally known as Google Editions, today the mighty search engine company rolled out the much anticipated http://books.google.com/ where US based owners can now purchase the books. International users will have to wait to next year in order to start purchasing ebooksAmazon. Google said its digital books are compatible with a number of reading devices, including the Barnes and Noble Nook and Sony e-reader, but are not compatible with the Kindle .

So who determines the price of the book? Well Google is going with the Agency Model and allowing publishers to establish their own prices. Sell a book and get 70 percent of the list price for each sale. For non-agency books sold on Google’s site, in which Google sets the price itself, Google will pay publishers 52 percent of the sale price.

Google said it also has partnership with independent booksellers who will allow people to sell ebooks off of their own websites or blogs.

James Crawford, the directory of engineering at Google said “Our pricing strategy is to be competitive,” relative to other electronic book offerings. For many best-seller titles, he added, pricing is set by the publishers, to whom Google will in most cases pay 70 percent of the list price for each sale. For so-called non-agency books sold on Google’s site, in which Google sets the price itself, Google will pay publishers 52 percent of the sale price.

Don’t have an e-reader? Do not worry! Google is making e-book reading applications for Android, Apple, Blackberry, PC’s and MACS.

Certainly its about time Google rolled out their book store, they do have some experience with their open source classic library they started a few years ago. But after much litigation over the ownership of public domain works, Google decided to the other route, and deal with publishers, and authors directly to sell copyrighted work and get a take.

Its great authors and publishing companies can now directly list books with into the Google eBook Store and get a strong return for each sale, and also get tremendous visibility on the Google Search Engine.

When we took at a look at the prices to see how competitive they were versus the competition. The books on display seem to be priced almost identical with Amazon and Barnes and Noble, with a few exceptions (Cross Fire, by James Patterson, is .99 at Google’s store, compared to .99 at Amazon and Barnes & Noble.) Most popular books are priced between .99 and .99. So it looks like Google is not going to take the Amazon route, and drastically undercut all of the competition to dominate the ebook market.

Another nice new facet is just how many options you have to buy a book you want to read. So lets consider our previous example, Crossfire, and we had options to buy from; Amazon, Barnes and Noble, Books-A-Million, Borders, Indiebound, Alibris, Qoop, Amazon and more! It also had an option to search your closet library for that particular book.

Can we be too far off from Google running advertisements in their books if you decide to read them on a branded Google e-Reading application? What do you think?

A recent study conducted by GFK MRI has found that the market exploded in the USA this year. It is up from 2.9 million e-readers last year to over 6 million devices this year!

The overwhelming majority of eReader owners interviewed in the 12 months ending October 31, 2010 (75%) had read a book on their device in the last six months, compared to newspapers (18%) and magazines (15%).

The study was very in-depth, analyzing many different facets of e-reader ownership and excluded people who read ebooks or magazines on tablet devices, such as the Apple iPad and Samsung Galaxy Tab.

The group is also preparing a report on Tablet Computer usage and the coloration between people who have e-readers and those who participate in social networks.