Filmmakers: Huntsman isn’t focus of documentary
Filmmakers: Huntsman isn’t focus of documentary By Thomas Burr The Salt Lake Tribune Published Mar 4, 2011 11:47AM MDT Washington • The producer of a documentary chronicling U.S. Ambassador Jon Huntsman Jr.’s time in China says the effort has nothing to do with Huntsman’s potential presidential campaign. Geralyn White Dreyfous, who was the executive producer of the Oscar-winning film “Born Into ...
Read more on The Salt Lake Tribune 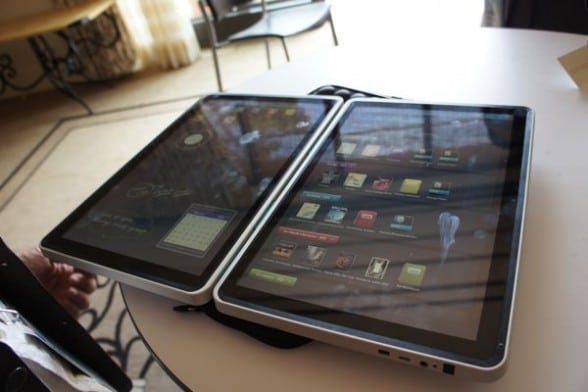 We saw the writing on the wall about Kno and are pleased to announce they are in talks to pull out of their tablet investments and focus on software.

Kno has not actually shipped either of the two tablets that have been displayed in many tech shows over the course of the last year. They have two models in development and those who pre-ordered are left high and dry. The Silicon Valley startup initially promised to deliver its 9 and 9 versions of the tablet by the end of 2010.

Kno has raised over ten million dollars to get into the tablet arms race and facilitate relationships with colleges and universities to get their custom software and tablets in the school rooms. Unfortunately, their management has been heavy on the software and light on the hardware. Kno Co-founder Osman Rashid has a lot of experience in digital education market. He was also the co-founder of Chegg, the textbook rental business that is reportedly aiming for an IPO soon.

What is in the future of Kno? They are going to be building iPad applications and other applications for Android.

Kno has been playing a game of show and tell, promising us everything but producing nothing. Everything about their company has been muddled with inconsistencies.  It is very hard to get behind a company that keeps on pushing back release dates without giving any kind of reason why. Even now, when it’s confirmed that the company is getting out of the tablet business and selling it off to other companies, no one at the company would comment. This same attitude about keeping everyone in the dark during their development process is the reason hundreds of people cancelled their pre-orders.

Publishers Weekly reports that Barnes & Noble has made 50 positions redundant—even executive positions, such as VP of merchandising Rob Wietrak. “A B&N spokesperson stressed that the company is reallocating resources to areas that are expanding, such as its digital operations,” Jim Millot writes, “but had no comment on how duties of the departed buyers and others would be divided up.”

Certainly it’s hardly a surprise that financially-troubled B&N is reorganizing, and eliminating executive positions will also eliminate executive salaries. Exactly what this will mean for B&N’s “digital operations,” such as e-books, remains to be seen, however.

(Found via The Bookseller.)