The Gadgets.Net's James Cushing reports that "Amazon is entering the smart phone business, and their entry is bound to make a stir once you get a look at “Amazon Blaze” Android phone!

He reports that photos and specs were leaked.  The pictures are not exactly particularly unofficial, unless someone put together a hoax, but rumors have been rife that Mirasol was hooking up with a maker for a device to be announced next week, and while some hoped it would be Amazon, there was speculation another vendor was involved.  But it apparently IS Amazon, if this is not a game someone's playing.

THE REST OF THE H O A X
Most of us were expecting an Android tablet (larger size) but this is very interesting.   Here are some excerpts (go to the site to see all the photographs). What they got shows:

' a Dual-Core handset with some very impressive hardware and some rather interesting features that just make you the envy of your friends when you show this bad boy off.  The Blaze will feature a 1.2 GHz Qualcomm MSM8660 processor with a 4.3-inch Mirasol display. '

MIRASOL - A really different type of smartphone. A real First, if true.  But Qualcomm hinted last year and I reported here that Amazon was the one. It's e-paper technology that has the advantages of e-Ink:

. readable in sunlight
. fast enough to do full-motion video
. great battery life (unlike with AMOLED screens)
. not expensive
while being in COLOR -- somewhat subtle and muted from what I've seen in a recent showing at a consumer electronics show, but the article says it "can handle bright, vivid colors."

[ Now I see why the hoaxer mentioned "bright, vivid colors" ]

' If this isn’t enough for you, the Blaze will also have 512MB of memory, 5 Megapixel rear and 1.3MP front-facing cameras, NFC support and…yes…a rear-mounted solar panel for keeping the phone charged!  Just imagine how this is going to stand against the battery sucker Androids all around as it already has got a very power-efficient display...

The Blaze is powered by Android 2.3 Gingerbread, has HSPA+ data services and access to your Amazon and Google accounts.  It’s also been rumored that Amazon will provide regular software updates to prevent fragmentation and here I predict that the Android Market will be replaced by the Amazon’s Android App store.

From the advertising graphics, it appears that the Blaze will be available via AT&T and Verizon.  No word on pricing but it does look like you can expect the phone in the early fall.  It must be noted that this could be an April Fool’s prank by Amazon, but if it is it’s a very elaborate one. '

He's somewhat disbelieving too, but the timing is right for the announced Mirasol unveiling. H O A X [Log kept for now though. Sorry if I helped get some hopes up.  Maybe I should have an image of an omelot on face here!] 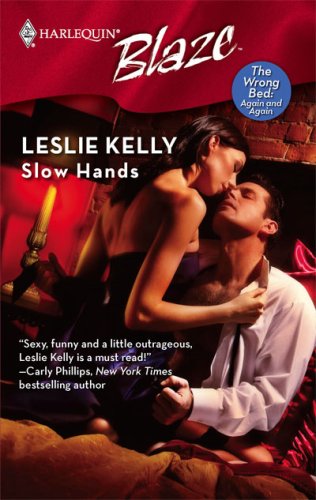 Slow Hands (Harlequin Blaze)
His price? Pure pleasure... This is Maddy Turner's lucky day. The civilized society girl just bid on sexy rogue Jake Wallace at a charity bachelor auction and won! But Maddy knows Jake's dirty little secret. And it should keep her from trying out her
Price:$ 14.93BUY IT NOW