Betabeat has interviewed magazine design icon Roger Black, who over the last few decades has been responsible for redesigns of a number of well-known magazines (including Rolling Stone, New York, the New York Times Magazine, and Newsweek. To say that Black is “famous” in the magazine design scene would be like calling Michael Jackson “well-known”.

Black says that he is “flabbergasted” by how many people have bought iPads, “and even more so how the publishing industry thought it was some kind of magic pony that would save them.” But even so, Black seems to be adapting to the direction the industry is going rather than bemoaning it. His latest project, Treesaver, is a HTML-based project aimed at dealing with device fragmentation.

Treesaver is a system in which magazine publishers can lay out an article once, and have it readable across the gamut of platforms, from computer to smartphone. Since it’s open-sourced, publishers can use the basic system for free, pay extra for templates designed by Black, or pay more for custom designs by Black himself.

A number of Black’s design peers suggest he has “sold out”, but Black suggests that the content is really the important thing. “It’s crazy for a designer to end up saying this, but I think if nothing else, RSS feeds on the Web taught us that people just want us to give them the content and get out of the way.”

Since Treesaver is HTML-based, it means those who use it will be less dependent on the app-store model, by which Apple will take 30% of the revenue of apps it sells. It allows publishers to deliver that sort of content using the web, instead.

I find it interesting that even well-known magazine design mavens can adapt to the digital age. I wonder how widely-used Treesaver will be?

Darlene M. Washington wakes up one day and decides to create an electronic bookstore for her titles to be bought and read all over the world.  Just like that, DMWBooks.com was born!  “There used to be a day where getting published meant numerous submissions to book publishers, with volumes of rejection letters.  Now all you have to do is press a couple of computer buttons, and voila, you’re published!  Indie publishers (Independent Publishers) are recognized by major book chains such as, Google eBooks, Amazon, Borders and many others.  Google eBooks has emerged with over 3 million titles by various industry publishers. Indie publishers are a viable source for readers. The International Digital Publishing Forum states, 3rd qtr. 2010 represented 9.7 million in over all eBook sales.”

What does this mean for books in print? “So far it means, a sizeable competition.  It’s easier for textbooks for schools and offices to stay in print, vs. novels, cook books, etc.  Novels are a favorite pastime and can be used in any setting, unlike textbooks created for a learning environment.  Electronic books can be 1 million strong in your personal cloud library, accessible anywhere there’s internet, and read on various media devices.  Gone are the days where carrying your favorite Stephen King novel was back breaking work.”

What’s so great about DMWBooks.com? “DMWBooks.com is an extension of me.  It features titles that I’ve written and a few by my pseudonym.  More importantly, it’s interactive, entertaining and within a secure financial environment with purchases via PayPal. There’s The Rant Bar – an electronically distributed column, various unsolicited commentary, and categories like Getting Philosophical, Poetic Compilations, and Sex & Love.  Some of the books featured are Sealie Rose I, Bitch Squad I, Ironicles, and Love, Life and Learning.  All titles are downloadable PDF files. Some books are also in Kindle format.”

Why should people buy these titles? “Because much like Spike Lee, Robert Townsend, Robert Redford, Clint Eastwood, the Harlem Renaissance artist, and the many women writers who represent the ‘indies’ of the world, ‘discovery is key.’  My world of creativity is not status quo.  I offer my brand as an African-American woman having grown up in the projects with a Bachelors degree from Columbia College Chicago, and a vast background in business administration, advertising and public relations.  It’s a unique life experience which makes my writing fun, challenging, emotional, and at some point enlightening for audiences 18+.”

Widescreen TVs, black bars, and e-books: Why complications can cause consumer conniptions

I’m reminded of this every day at my tech support job, where I take calls supporting a prominent retailer’s store brand of HDTVs, Blu-Ray players, Bluetooth equipment, and wireless routers. Most of my work has to do with helping people set up their TVs, and one of the questions I’m most commonly asked is, “How do I get rid of those black bars to the left and right of the picture?”

The black bars are, of course, an artifact of the change in aspect ratios. As TVs got wider, older programming has to be shown pillarboxed in order to present the whole picture. But nobody ever really seems to understand this when I explain it to them. They just want to know how to “make it fill the whole screen”, even if they’re going to chop off the top and bottom of the picture by doing it.

So what seemed like a simple decision at the outset—let’s make screens wider so you get a more movie-like experience on TV in your home—just ends up confusing the average person, or at least the average person who calls tech support hotlines. And of course, all that old content isn’t going to go away, which means that people are probably going to be asking that question for years or decades—for as long as people want to watch Star Trek and A-Team re-runs, essentially.

(Not that this is the first time this problem has shown up. The original decision by moviemakers to widen their screens to try to draw people out to watch more movies eventually led to people in the ‘90s wondering why there were black bars at the top and bottom of their DVD pictures.)

I hasten to note that, as I’ve said before, these are not stupid people. They’re people whose minds are occupied by other things, apparently to the point where they can’t fully grasp the difference between TV aspect ratios. And to be fair, why should they really need to? If they were AV geeks, they’d be setting up their own equipment. There’s a tendency to want to assume that just because something is simple for you, it should be easy for anyone, and people who can’t handle it are morons. They’re not.

At any rate, these people are also the people who make up the majority of the e-book reader market. As I’ve said before, this is why Amazon has done such a stellar job of hooking people on e-books with its Kindle. They keep everything simple, by blocking off people from more complicated options (like, say, buying e-books from other stores). It’s e-books for the “how do I get rid of those black bars?” crowd, simplifying the process so everyone can understand.

(And that’s not a bad thing, either. Apart from the Kindle, I’m not sure what e-reader I would recommend to my parents. I may not like Amazon’s policies, but I can’t deny they make everything dead simple.)

Earlier today I linked Douglas Moran’s blog post complaining that the e-book market was too complicated, with too many readers necessary for reading too many books. Moran, I, and I expect most of TeleRead’s readership are tech-savvy people who can generally understand how to install applications and navigate other complications inherent in today’s e-book market, and we find this all too onerous; how much worse a time are people who puzzle over black bars on their TV screens going to have of it? 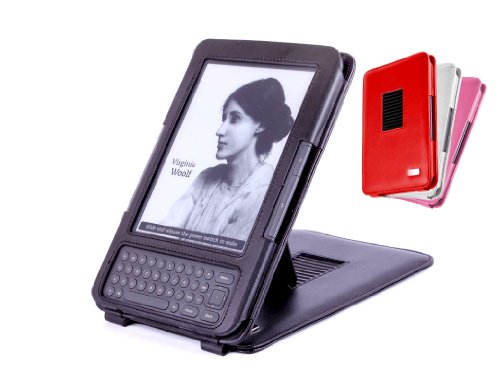 Duragadget Leather Kindle Case with Adjustable Stand (Black)
DURAGADGET's new leather case for the Amazon Kindle 3 protects your Kindle and enhances its use. The soft leather acts as a tactile barrier protecting from knocks and scratches whilst out and about. The in-built stand function allows you to place t
Price:$ 18.99BUY IT NOW

Kandle by Ozeri II in Black — 2nd Generation LED Book Light for the Amazon Kindle (fits latest generation Kindle and all models), and other eBook readers 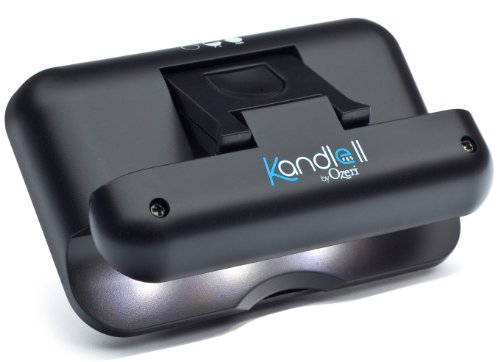 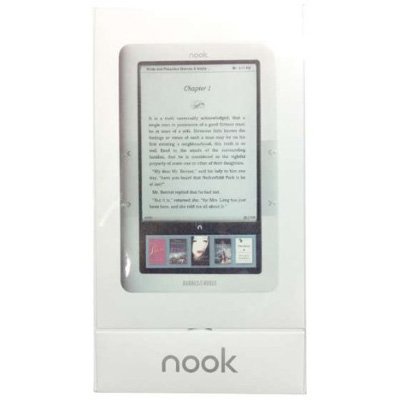 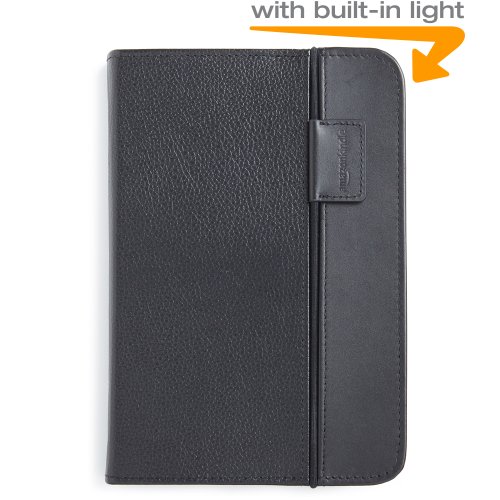 However, while the price might seem tempting, in some aspects the cost cutting measures seem all too evident. The operating system is Android 2.0 while its the resistive touch screen technology that finds application in the new Novel. The tablet is powered by a Samsung ARM 11 mobile processor coupled to a 256 mb DRAM. The tablet has a 2 GB internal memory and features 802.11b/g/n Wi-Fi to connect to the internet.

These apart, the black Pandigital Novel includes other features such as a headphone jack, a mini USB 2.0 port, SD, MMC memory card reader along with an integrated accelerometer for automatic screen rotation. The tablet also includes built in speakers and sorts a 7 inch 800 x 600 pixel display.

So to those of you who think the above will suffice, flock to your closest QVC. They are currently accepting orders for the tablet.

sony ebook:Sony 6" Display Digital Reader Touch Edition (black)
Link: www.buy.com Touch screen makes reading a breeze. Experience a full touch screen that reads like a real book on the Reader Touch Edition. Turn pages with the swipe of a finger and enjoy fast and intuitive navigation of your favorite books. Choose more content from more places like the online Reader Store, where you can access new releases, or choose from over one million free public domain titles from Google Books or and find links to borrow eBooks from public libraries. According to a Publishers Weekly report, “the Commission suspects the companies concerned may have violated EU rules prohibiting anticompetitive practices. All group leaders and executives working on digital books must now respond to these investigations.” Publishers were officially asked to make themselves available for these “men in black” — their new nickname in the industry — while their smart phones, laptops and computers were being removed for meticulous checking.

What makes it even more unbelievable is that the French Senat had approved a law just last October that extended the fixe price (the cover price of print books) to ebooks … “Why then investigate individual firms rather than looking to work with a member state’s government first?” wondered Edward Nawotka Edward Nawotka in his Publishing Perspective column. Indeed.