Hocking, the 26-year-old author, who sold over a million copies of her self-published e-books (Amazon, Barnes & Noble), has signed up with the Big6 traditional publisher for her next series.  Who wouldn't? assuming the terms are good.  I guess the large publishing house couldn't ignore this success story which happened without any traditional publisher marketing, backing, etc.

What a scene.  Kudos to her.

' A heated auction for the rights to publish her books began early last week, and several major publishers, including Random House, Simon & Schuster and HarperCollins, dropped out as the price climbed into the seven figures.

The bidding eventually rose beyond million for world English rights, said one publishing executive familiar with the negotiations. (St. Martin’s declined to comment on how much it agreed to pay.)  Ms. Hocking was represented by the literary agent Steven Axelrod.

The first book in the series will be released in fall 2012, a spokeswoman for St. Martin’s said. '

As Hocking reported on her blog Tuesday, in response to news stories that she was shopping her series to traditional publishers, Hocking explained her thinking (and activity) to her readers:

' “I want to be a writer,” she said. “I do not want to spend 40 hours a week handling e-mails, formatting covers, finding editors, etc. Right now, being me is a full-time corporation.” '

The Bloomberg Businessweek/AP story by Tara Bannow the other day has a good backgrounder on Hocking's story, from last year to the signing.
She's written only one of the four books so far, so there'll be a bit of pressure, which probably won't have much effect on her.

Bannow also writes, "Earlier this year, Terri Tatchell, co-screenwriter of the 2009 science fiction film 'District 9,' agreed to adapt the books from Hocking's Trylle Trilogy as a screenplay."
There's a bit on how she's adjusting to all this, and you should read it there.

In the meantime...
If you want to check out her existing e-books while they are still available and at a good price, see her Amazon author's page.

' ...more than 50,000 Audible Audiobooks are available for download on the latest Kindle (UK: K3) via Wi-Fi delivery.
Of course, owners of any Kindle device can continue to purchase Audible audiobooks from Audible.com and transfer the titles to Kindle via USB. '

To find out more about how to do this, go to Audible Audiobooks, where they offer a 30-day free trial that includes "two free audiobooks."  The page will give an idea of what's available.  Those already subscribing to Audible Audiobooks they can listen to while on the go will probably welcome this news, as it frees you from the USB cable transfer in that you can download large-file Audible book whenever you are connected to a WiFi network, whether at home or at work or in a cafe somewhere. 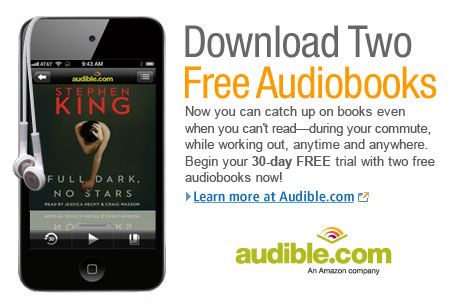 In the past if you wanted to buy a quality Audiobook you had to go to the main site Audible.com and transfer the titles to Kindle via USB. Amazon has changed the game and is allowing users to purchase audiobooks and deliver them to your Kindle via WIFI.

Over 50,000 audio titles are available with the launch of this new service. Audible offers two free audiobooks with a 30-day free trial of AudibleListener Gold Membership. To get started, go to the Audible Audiobooks Store to view audiobook titles available for purchase from Audible, read by your favorite celebrities, authors and professional performers.

Now hear this! We’re thrilled to announce that more than 50,000 Audible Audiobooks are available for download on the latest Kindle via Wi-Fi delivery. Of course, owners of any Kindle device can continue to purchase Audible audiobooks from Audible.com and transfer the titles to Kindle via USB.

Audible offers two free audiobooks with a 30-day free trial of AudibleListener® Gold Membership. To get started, go to theAudible Audiobooks Store to view audiobook titles available for purchase from Audible, read by your favorite celebrities, authors and professional performers.

Hear Donald Sutherland breathe life into The Old Man and the Sea; Listen to Frank Brady recount the remarkable arc of Bobby Fischer’s life in Endgame; Kathryn Stockett’s The Help is illuminated by three different narrators who portray the maids and the white families they toil for in 1960s Mississippi…