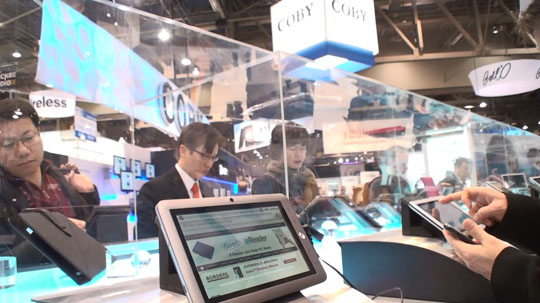 Coby has certainly been busy in the research and development department unleashing a flurry of tablets at the CES show in Las Vegas. Where most companies are showcasing one or two tablets, in addition to a large variety of electronics, Coby is focusing very strongly on the tablet segment to diversify their portfolio.

At the Coby booth they were showcasing six different tablet computers all running the Google Android operating system. All models included WI-FI for internet connectivity and bundled applications such as Aidko e-Reader, document viewer, calendar, and a clock. Although all models do not include the Google Android Marketplace, Coby has entered into a partnership with Appslide for alternative Android apps. They also all feature mini HDMI and USB 2.0 connectivity for integration to your PC.

Batting third in Coby’s Kyros line of tablets comes the MID7026-4G 7 inch resistive TFT LCD edition with better resolution then the previous models with 800×600. This model is running Android 2.3 for the core operating system and for processing power runs the Samsung S5PV210 Cortex A8 1GHZ. It also has 512 MB of DDR2 memory and for storage space you have 4GB of memory that can be expanded to 32 GB via Microsd.

The next tablet from Coby boosts the screen size up to 8 inches from the 3 previous models which were 7 inches in size. This screen technology also has TFT LCD resistive and has 512 MB of RAM. For processing power you have a Samsung S5PV21 Cortex A8 1GHZ. The Kyros MID8025-4G also runs on the Android 2.3 operating system.

The final tablet they were showcasing was the Kyros MID 1026-4G which also features a 10.1 inch screen with the best resolution of all of Coby’s offerings with 1024×768 and also is Capacitive TFT LCD. It also runs a more updated version of Google Android with 2.3 and has 512 MB of RAM with 4 GB of internal memory. Like the last few models you can also enhance it up to 32 GB via MicroSD.

This is more or less why Coby has not been fourth-coming about price points for their tablets because of lingering questions on resistive/capacitive screens and future implementation of 3G devices will strongly be the factor between a 0 entry level tablet and a 0 one. They did mention that the 7 and 8 series will be out in the market in the USA only in Q2 of 2011. No word yet on the availability on the 10 series, but we see this maybe coming out at the end of the year.