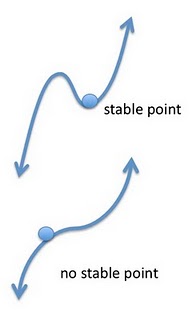 In mathematics, catastrophe theory is the study of nonlinear dynamical systems which exhibit points or curves of singularity. The behavior of systems near such points is characterized by sudden and dramatic changes resulting from even very small perturbations. The simplest sort of catastrophe is the fold catastrophe.

When a fold catastrophe occurs, a system that was formerly characterized by a single stable point evolves to a system with no stability. The point where stability disappears is known as the tipping point.

One of my goals for this past year was to raise awareness of the tipping point for libraries that will accompany the obsolescence of the print book. In January, I noted that Hal Varian’s equation describing the economic value of libraries also predicts that libraries of the current sort won’t exist for ebooks.

In March, I put the question directly to John Sargent, Macmillan’s CEO. His response, that ebooks in libraries were a “thorny problem” got quite a bit of notice. Unfortunately, the big trade publishers have yet to actually do much to address the thorns.

In May, I was pleased that the editors of Library Journal were putting together an “eBook Summit” virtual meeting to address some of these issues, and even more pleased to be invited to write a series of articles to help frame issues for the Summit. The event ended up being titled ebooks: Libraries at the Tipping Point. For me, the highlight of the summit was Eli Neiburger’s talk on How eBooks Impact Libraries. This talk is destined to be known forever as the “Libraries are Screwed” talk, and if you’ve not viewed it I urge you to do so forthwith.

Several other contributions raising awareness of the library-ebook catastrophe are worth noting. Emily Williams’ commentary on Eli’s talk is worth reading and her attention to the issue has been consistent. Library Journal’s Heather McCormack is another persistent voice- I particularly loved the story she told in a column written for O’Reilly Radar. Tim Spalding’s post on “Why are you for killing libraries is another favorite.

So at the end of the year, what have we accomplished? One disappointment for me was that although Library Journal’s eBook Summit was quite popular with librarians, it appears that very few publishers took notice. On the rare occasions when publishers took notice of the role libraries could play in the ebook future, they tended to be depressingly reactionary, such as when the UK’s Publishers Association set out their plan to marginalize libraries while apparently thinking they were boosting them.

Similarly, Amazon announced yesterday the addition of a lending feature for the Kindle. This feature seems designed to compete with a similar feature in the Nook, but nowhere in the announcement is there any mention of libraries as being anything other than the books on a user’s Kindle.

Meanwhile, adoption of ebooks and ebook readers has accelerated. Amazon announced that the third-generation Kindle is the bestselling product in Amazon’s history. Barnes&Noble fired back, reporting that the NOOKcolor is the best selling product in its history. In comparison, this month’s announcement by Overdrive that it (finally!) has released apps for reading its library ebooks on Android devices and iPhone seems a bit too-little-too-late. (sorry, no iPad version!).

Perhaps the time is over for raising awareness about the catastrophic future of libraries. In 2011, let’s build things that change the system dynamics.